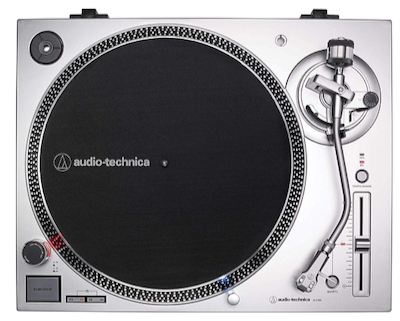 In this Audio-Technica AT-LP140XP review, I’m going to cover everything that you can expect to get with this turntable (from specs to setup to overall quality of use), as well as compare it to two other very popular Audio-Technica record players—the AT-LP120 and its successor, the AT-LP120XUSB.

To better help you understand how the AT-LP140XP compares to other notable turntables on the market, please use our interactive table below to directly compare the Audio-Technica AT-LP140XP to its turntable peers.

Let’s first go over all of the basics, which are specs (short for specifications).

Probably the most important thing for you to know about the AT-LPPP is that its the following:

That means that whether you’re placing the tonearm and stylus into the record groove to play a record or lifting the tonearm off the record once the final song finishes and returning it to its rest—you will be fully responsible for these tasks.

In short, if you’re looking to buy a record player to use while you fall asleep, this is not the turntable for you.

Also, unlike the AT-LP60X (which is a belt drive turntable), the AT-LP140XP is a direct drive record player.

This allows the the turntable to start up a little bit faster than a belt drive turntable does.  And because you never have to worry about an elastic belt breaking down over time, you’ll likely notice that direct drive turntables offer a bit more consistent speed in their rotation of the platter, as well.

In attempting to be more of a professional turntable rather than a consumer friendly record player (like the Audio-Technica AT-LP120XUSB), the AT-LP140XP does not include a built in phono preamp.

This is very important, because it means that in order to play records (namely, in order to hear the music coming from the record), you’ll need to have one of the following two things:

Here are some additional specs that I think are worth noting about the AT-LP140XP:

So the great thing about the AT-LP140XP is that, although this is a turntable that’s really great for gigging DJs, it’s also simple enough to setup and use for the everyday average person.

Let me show you how simple it is to setup and use this record player.

First, make sure your turntable is on a stable surface or table.  Then, place the aluminum platter onto the spindle.

You then place the slipmat (provided in the box) onto the platter.

After that, you would simply need to place the counterweight onto the back of the tonearm.

You’re all set!  Now, you just need to do a little bit of trial and error to properly set the tonearm balance, tracking force, and the anti-skate of the cartridge to your precise liking.

What to Love About the AT-LP140XP

Once you unbox the AT-LP140XP, I think there’s a few things you’ll be able to instantly appreciate about this turntable.

For one, this is a record player that offers you professional features for a relatively entry-level price.  And I think it works quite well for either the everyday “average Joe” or someone that’s a DJ looking for a quality turntable to take with them on their next gig.

And as mentioned before, this record player comes with the highest torque motor of all of these turntables that we’re discussing today.  With a torque of 2.2 kgf.cm, the record player will start up quicker and provide an overall better, more stable playing experience.

So, if you discover that the AT-LP140XP doesn’t meet your needs or budget, it’s nice to know that you’ll be able to get a good, affordable record player if you can track down an Audio-Technica AT-LP120-USB.

Another thing I like about this record player is how they’ve simplified the process of upgrading your stylus.  But to talk about the stylus, we of course have to talk about cartridges.

The Audio-Technica AT-LP140XP uses the AT-XP3 cartridge, which is actually an entry-level DJ cartridge.  It’s very affordable (about $60), has an output level of 5.5 mV, and its tracking force range is between 2.0 and 4.0 grams.

But with these newer turntables that Audio-Technica is putting out, they’ve made it that if you want to upgrade your needle (stylus) in order to improve the quality of the music coming though your speakers, you no longer need to worry about having to buy an entirely new cartridge.

Now, just pop out the ATN-XP3 stylus and put in a new one.  Or, better yet, install the ATN-XP5 stylus or ATN-XP7 stylus for even better quality sound.

I personally love it when cartridge bodies can accept multiple different styli from the same manufacturer.  It makes upgrading your turntable so much easier, especially knowing that upgrading your stylus can have a dramatically positive effect on the sound quality of your music.

What I Don’t Love About the AT-LP140XP

There’s not a lot I don’t love about this record player, but I will say that there are some features you might expect to get here that aren’t included.

If you’re someone, for instance, that would love to get an affordable Audio-Technica turntable that has both a high torque, three pitch ranges, and USB capability, you’re out of luck (as the latter is something not available in the AT-LP140XP).

And as I mentioned earlier, the other feature some people may miss is the internal phono preamp.  That’s something that’s available in the aforementioned LP120 turntables, but not here on the AT-LP140XP.

While the AT-LP140XP is seen as a turntable that can be used for everyday home use, it’s really aimed at those that are taking vinyl record playing a bit more seriously, have higher end equipment to pair with this turntable, and are less interested in convenience and more excited about sound quality and playing performance.

The Audio-Technica AT-LP120-USB may technically be an older piece of turntable technology, but boy can it still hold its own.  Despite not having top of the line tech, like its pre-fitted AT95E cartridge, you might be surprised to know that, in my opinion, the AT-LP120-USB actually compares much more favorably to the AT-LP140XP than the AT-LP120XUSB.

And that’s kind of shocking, considering the AT-LP120XUSB was created to phase out and replace the AT-LP120-USB.

So what’s going on here?  Well, the first thing to know is that, after the AT-LP120-USB came out (and successfully satisfied both DJs and average Joe’s), Audio-Technica wanted their next turntables in this line to singularly target both DJ’s and everyday vinyl fans.

And so, instead of making one turntable that could satisfy both crowds, they wanted to make one turntable that would be considered more “high end” for DJ professionals, and one that was a bit more stripped down (but also more affordable) for the average Joe.

Problem is, when you’re just directly comparing the AT-LP140XP to the AT-LP120-USB, it’s amazing how well the old AT-LP120-USB holds up.

We’ve already covered some of the advantages the AT-LP120-USB has, but here’s another one I haven’t mentioned yet: Adjustable Tonearm Height.

In short, both the Audio-Technica AT-LP120-USB and the AT-LP140XP allow you to manipulate the actual height of your tonearm if you have installed a new cartridge that requires such an adjustment.  Depending on what cartridge you choose to use, this is an important feature, as you always want everything to be properly aligned and adjusted for optimum sound quality.

This option is actually unavailable on the AT-LP120XUSB.

One big disadvantage to the AT-LP120-USB, however, is its inability to be flexible when it comes to upgrading the stylus.  I mentioned before the immense benefits of upgrading your stylus to improve the sound quality, and how I love how Audio-Technica finally created a cartridge body that allows for you to easily swap in and out different styli that are from the same Audio-Technica line.

Well, this is something you simply cannot do with the AT-LP120-USB.  Long story short—the AT-LP120-USB comes with the AT95E cartridge, which is pre-fitted to the tonearm.  Now, if your stylus ever gets damaged, you can easily pop it off and replace it when the same exact stylus.  But, if you ever wanted to upgrade that stylus to something better, there are actually no other stylus options to upgrade to that will work with the AT95E cartridge.

The Audio-Technica AT-LP140XP, however, allows you to (for example) swap out the ATN-XP3 stylus for the ATN-XP5 or ATN-XP7.  And the more you upgrade, the more you’ll notice the sound quality getting more clear, open, and perhaps even improving the lower end (bass) in your music.

You would never assume that the AT-LP120XUSB would have a lower torque motor than the turntable it’s replacing, but that’s indeed the case.  I think that’s less of a function of the AT-LP120XUSB being inferior to the AT-LP120-USB, and more of Audio-Technica drawing a line in the sand to explicitly show that, if you truly want a more higher end record player (including a higher torque motor), you’ll have to shell out about $150 more for the AT-LP140XP.

And yet if you do that, there are some things that you simply won’t get with the AT-LP140XP.  I’ve mentioned them already, but I suppose I’ll quickly reiterate here.  The AT-LP120XUSB allows you to not only transfer vinyl records to MP3s, but it also features a built in phono preamp.  This gives you more options for listening to music, effectively making it easier to do so.

Without the built in phono preamp in the AT-LP140XP, you’re going to need to either have an integrated amplifier (one that has a PHONO input in the back, along with a ground wire connection), or have an external phono preamp.

I personally really love external phono preamps (I own the Vincent PHO 8 and believe the Schitt Mani provides excellent sound quality for the money) because it allows you to improve the timber and openness of your music (some phono preamps can also make your music sound warmer, while others make it sound cooler).

Ultimately, you get to really Frankenstein your music listening experience, which can be quite fun.  But just know that, without a built in phono preamp, there’s a chance you’ll end up having to spend more money on additional equipment.

One big benefit the AT-LP140XP has over the AT-LP120-USB is that the LP140XP allows for tonearm height adjustment (in case, for example, you wanted to remove the cartridge that came pre-mounted to the tonearm and replace it with the Ortofon 2M Blue or Ortofon 2M Bronze cartridge, for example).  The ability to adjust the tonearm can help ensure the the music sounds as accurate as possible.

The AT-LP120-USB doesn’t allow you to adjust tonearm height, however.

In the end, I do think the Audio-Technica AT-LP140XP is worth the money.  I think it provides enough features to satisfy potential buyers, and the one or two features it loses (namely USB functionality and a built-in preamp) are not at all consequential to the playing experience or the sound quality. I think if you can get over a bit of the sticker shock (close to $400), it’s easy to see that you’re getting a quality turntable that gives you tons of upgrade options in the future and should ideally provide you with many years of vinyl spinning enjoyment. 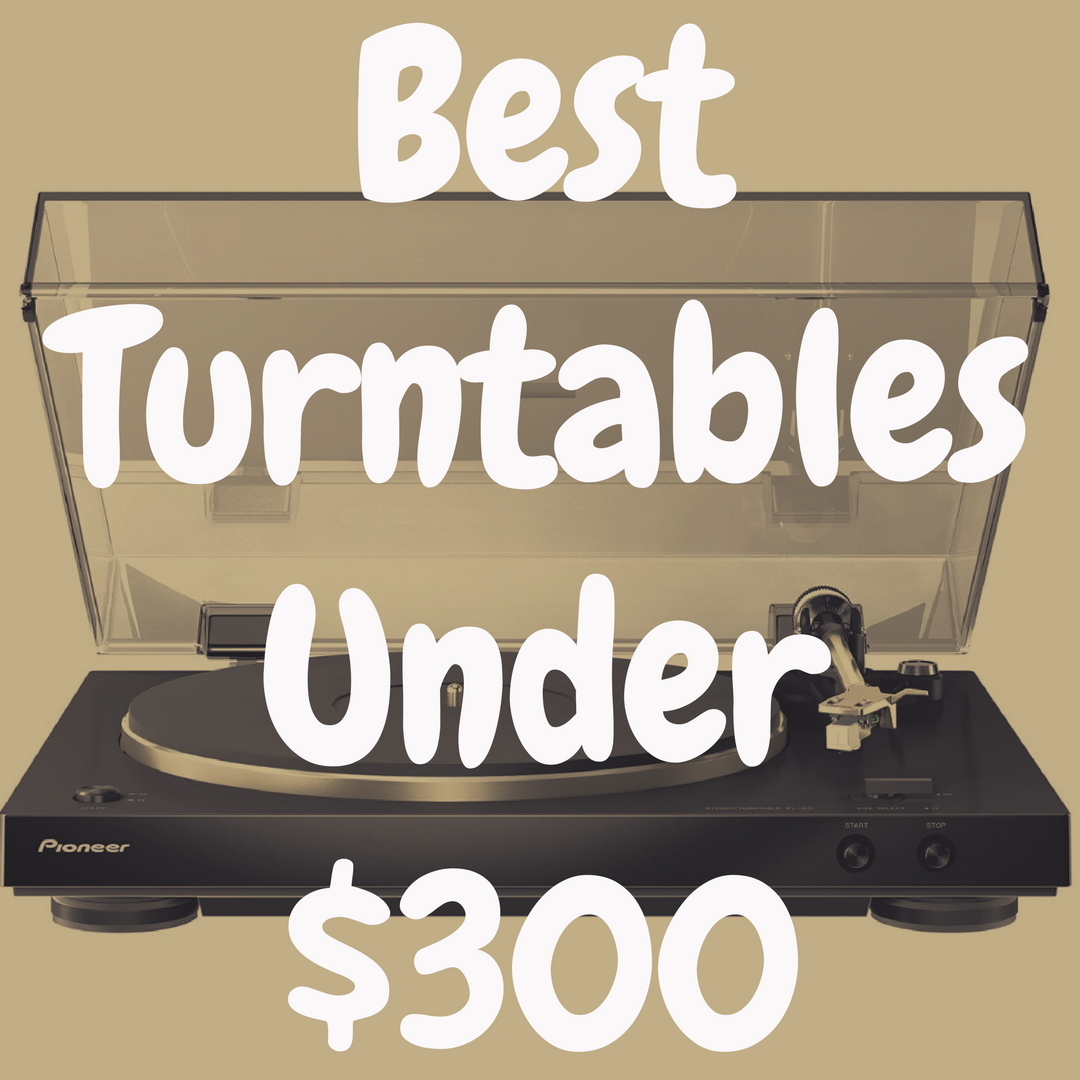 What’s the Best Turntable Under $300? 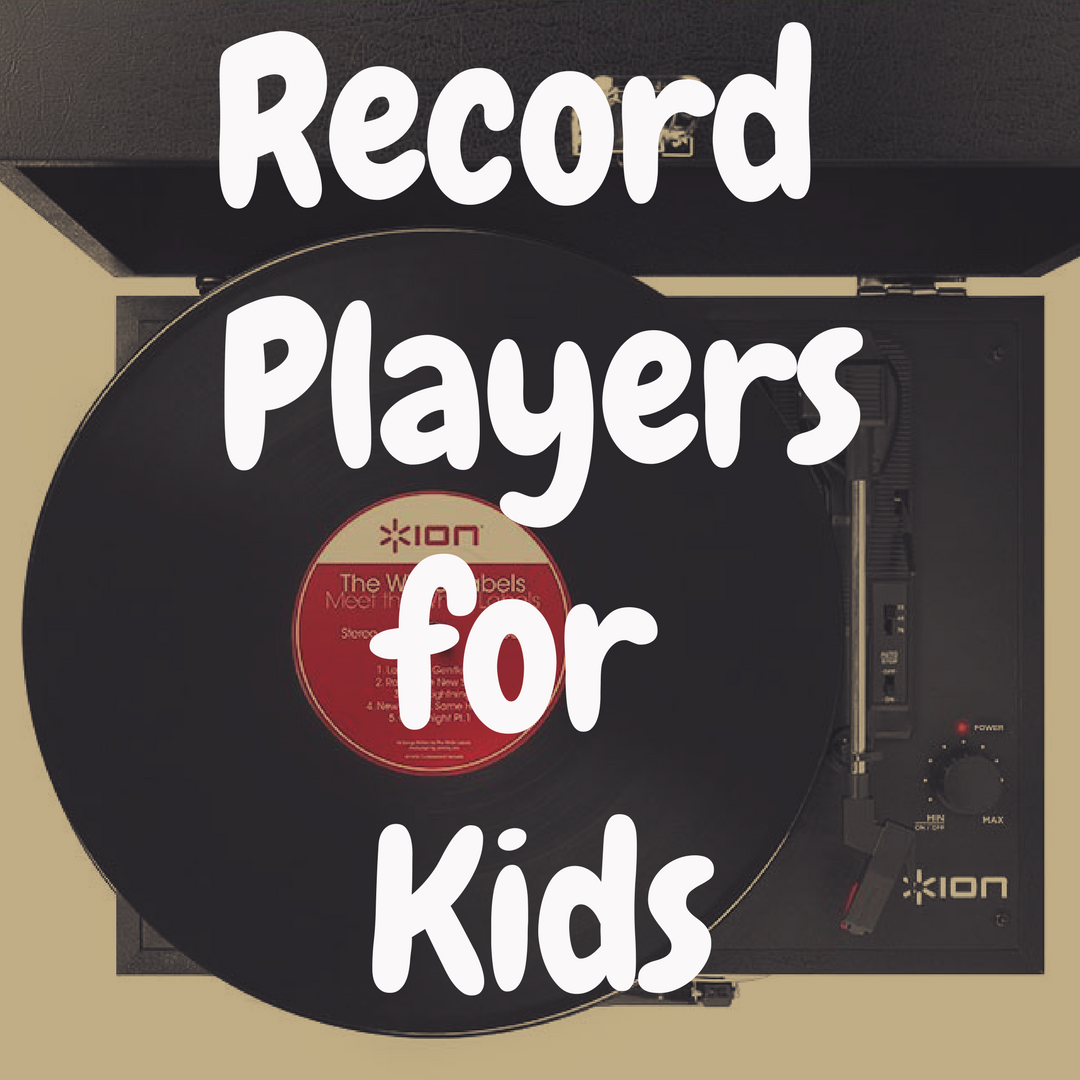 10 Record Players That Kids Will Love 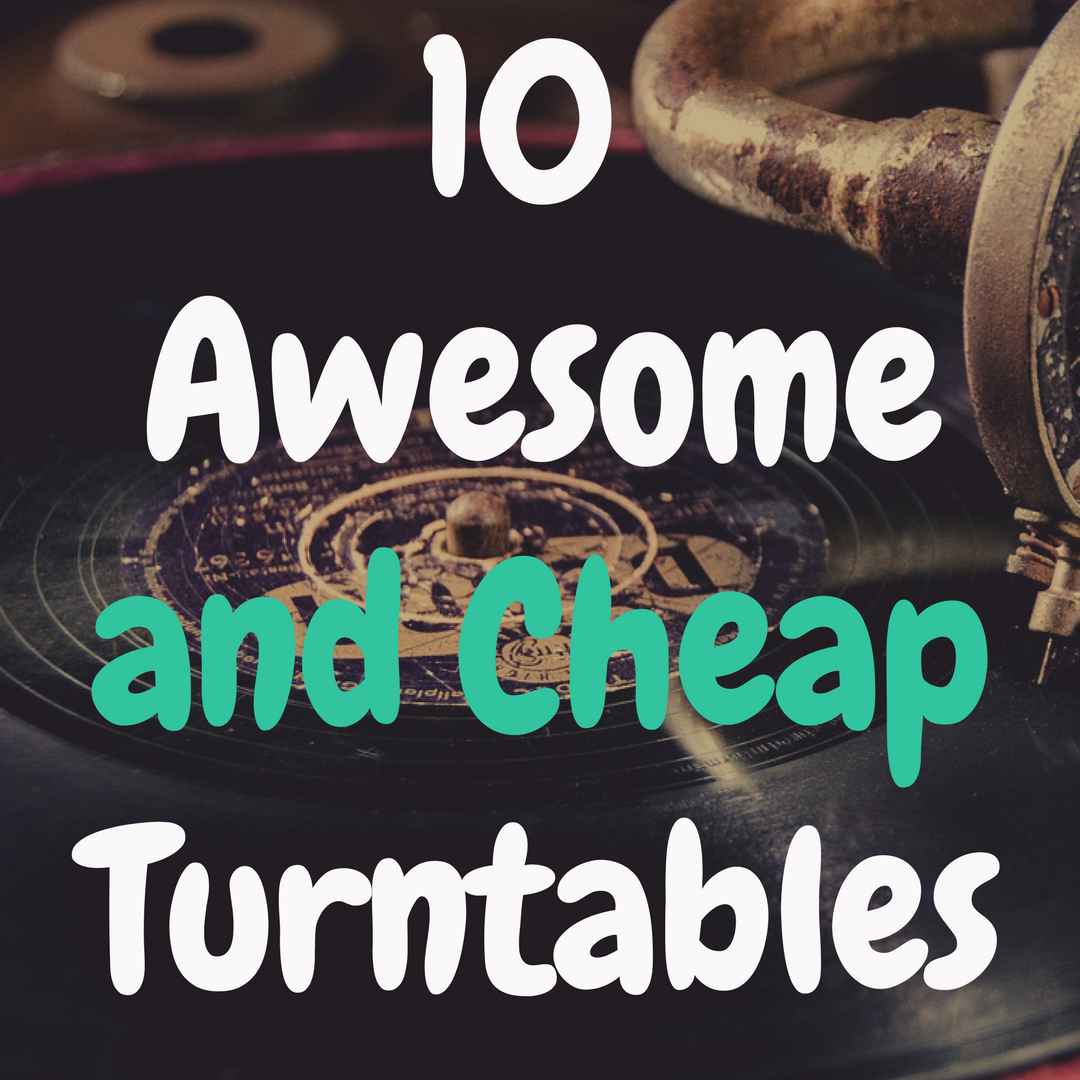 10 Record Players Under $100 That Are Awesome 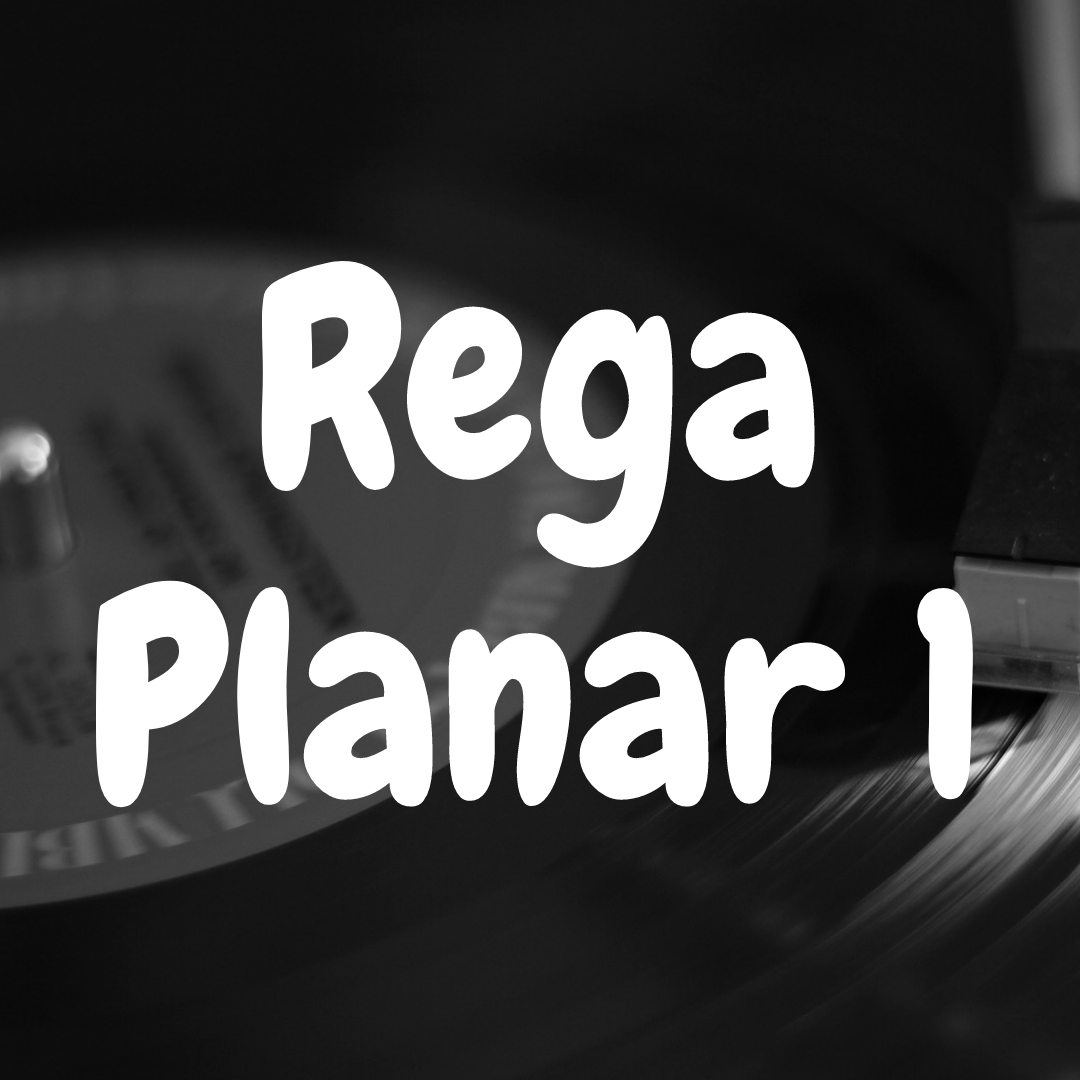