So your record player plays too fast and you’re confused and frustrated because it just won’t work correctly?  If this describes your situation, don’t fret, as I’ll outline three reasons why your turntable plays too quickly and how you can fix the problem.

The first fix is probably the most simple fix, but I do think it’s very much worth mentioning (especially for those brand new to the world of vinyl records).

Therefore, if your record player has a speed control button or dial, you might notice it says “33” and “45” on it (and in some instances, it’ll say “78,” a speed that allows the turntable to properly play shellac records).

Anyway, what you need to know here is that a record player that spins too fast is most often caused by the fact that the speed setting is set to 45 (or 45 RPM) instead of 33 (or 33 RPM).  If you put a 12” record on your record player and spin it at 45 RPM, not only will your record player play too fast, but you’ll notice that the singer on the record sounds like a chipmunk, as well.

The second possibility for the turntable playing too fast is due the belt being installed improperly on the motor pulley.  Now, if you have a portable record player, or a direct drive turntable, then this unfortunately (or perhaps fortunately) doesn’t apply to you.

But, if you’re someone that owns a belt drive turntable, then you’re likely familiar with the need to install the belt.  The belt on a record player needs to be installed in a specific way on the motor pulley.  Doing so allows the motor to spin the platter at the proper speed, thus giving you the ability to enjoy your records.

On some turntables, you actually have to adjust the position of the belt on the motor pulley in order to change the speed of the turntable itself.  I remember when I first purchased a Pro-Ject Debut Carbon years ago, and in order for me to listen to 7” records, I needed to remove the platter and manually change the position of my belt on the motor pulley.  Doing this changed the rotation speed of the platter, as the record player went from spinning 33 revolutions per minute to 45 revolutions per minute.

So, whether you do indeed need to change the belt positioning in order to listen to certain records, or maybe you just improperly installed the belt when you got the turntable, I would highly recommend you look into the belt position on the motor pulley—it could certainly be the culprit. I encourage you to watch a video (below) that I created on my Devoted to Vinyl channel on YouTube that goes into more detail on properly installing the belt onto the motor pulley of a record player.

My final suggestion is again aimed at those with belt driven turntables, as perhaps it’s time to simply get a new belt.  Like most things in life, a belt inside a record player gets worn out and eventually needs to be replaced.  It’s said that a belt will only last for a finite amount of record playing time, and once that’s up, you’ll want to replace it as soon as possible.

For example, it’s possible that your belt has become overly stretched out over time, thus leading to the record player not spinning at the proper speed.  Not only can excessive use of your turntable wear out your belt, but the belt being exposed to human hands (and the oils on your fingertips), can lead to a more expedient breakdown of the belt.

So consider replacing the belt with a brand new one and see if that fixes the problem.  If so, it’s one of the cheaper ways to fix a seemingly big problem.

When a record player plays too fast, it’s no fun at all.  The vinyl hobby is supposed to feel fresh and exciting, but no enjoyment can be had when your record player won’t play you favorite records.

Hopefully, the solutions I’ve laid out in this article will help remedy your speed problems and allow you to finally hear the record as it was originally intended. 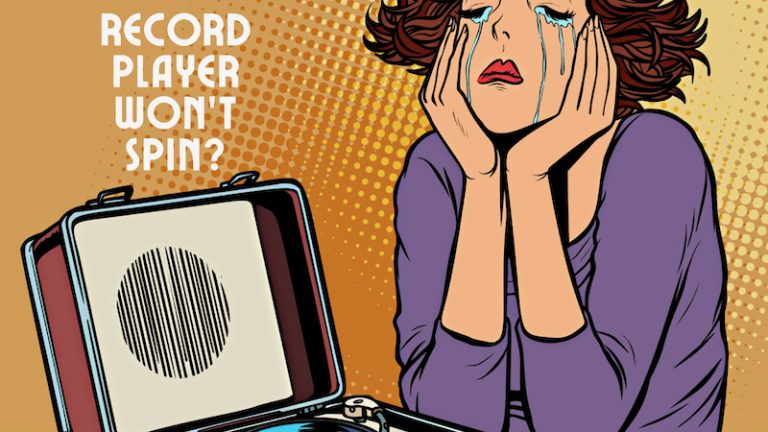 So you just got a new record player, or perhaps pulled out a vintage turntable, and you’re all excited to play a beautiful colored vinyl record.  But…