You are here: Home / Turntable Reviews / The Best Portable Record Players for Your Lifestyle

The “suitcase” vinyl record player was first popularized in the early part of the 20th century. The first suitcase models were wind-up gramophones, gradually morphing into the automatic record players more familiar to us today. At a certain point, however, the suitcase models became quaint and outdated, and eventually record players fell out of favor altogether.

With the recent renewed interest in record players and vinyl, as well as a new generation’s appreciation of all things “vintage,” a desire has come for not just new turntable models, but models that mimic the look and feel of the old days (with all the features people have come to expect from modern players).

So which record player suitcase will fit best in your luggage?  Chances are, you’re looking for something stylish and easy to use that won’t break the bank. Crosley Radio has become a leader in stylish suitcase players with a vintage feel, but other companies are getting in the game too.

And below, please take a moment to check out our interactive table which features some of the most popular portable turntables currently on the market:

In this article, we’ll discuss these five models in-depth:

Without further ado, let’s jump right into it with the Crosley Bound.

Opening a roadie case usually means one thing: it’s about to get loud. It’s no different with the Crosley Bound, only this time there’s a lot more than one instrument playing. The Bound is a strapping case, meant to mimic the hardbound containers where musicians store their instruments on tour. It has a sturdy body and no frills style that belie its one purpose: this thing is loud.

Built-in speakers don’t usually mean built-up sound, but the Bound’s full range stereo speakers put that assumption to the test. And if you’re not satisfied, a stereo RCA output means you can plug in more speakers for even more dynamic sound. This turntable, like most Crosley’s, is belt-driven, meaning it suffers from less internal noise, which can have a dampening effect on sound production.

All of this means, of course, that the Bound is a little bit more expensive. But think about it. If you’re on the go and want the full vinyl listening experience to go with you, you’ll want something durable and sound-centric. Crosley has less expensive suitcase models like the Cruiser and the Traveler, but the lower you go, the more quality becomes an issue.

Why not spring for something heavier?  The Bound is exactly that.

Nothing screams ‘60s retro quite like the Spinnerette. Looking like a gadget James Bond might carry with him, it has the style and technology to back up its spy bona fides.

The retro speaker bank doesn’t begin to describe what’s inside: USB, portable audio capabilities, audio ripping software. Not to mention that the entire thing is constructed with ABS, a plastic compound stronger than polystyrene. The Spinnerette feels solid, and has solid inner workings. It’s a great pick-up if you need to pick up and go.

The one area where the Spinnerette lacks, though, is in the speaker bank. Sometimes the quest for the perfect retro style can lead to sacrifices in sound. While the Spinnerette’s classic radio bank speakers look spiffy, they don’t sound particularly dynamic. Stereo dynamism requires speakers to be set apart a certain distance, so as to simulate an immersive panning audio effect. This is key to the vinyl listening experience, as one of the best parts of listening to vinyl is feeling the warmth of the room it was recorded in. Most suitcases leave out this element. Still, they make up for it with other features, and the Spinnerette has “other” in spades.

This is another essential aspect of choosing portable players -– what kind of balance are you getting between design and functionality? Many throwback modern record players look cool, but how much are the manufacturers focusing on the look and how much are they looking at the ways record players work for modern listeners?

The models that have modern features like USB ripping and mp3 capabilities, plus high quality built-in audio if you can find it, are the ones you should seek out. And a willingness to go up in price on your part can often mean the difference between well-balanced models and those that only limit themselves to one wow factor.

Electrohome is another electronics manufacturer of yesteryear that has found new life in the new wave of vintage. A Canadian manufacturer of televisions in the middle part of the century, the brand name, much like Crosley, has been resurrected in the modern day in a line of turntables, including a suitcase model called the Archer. 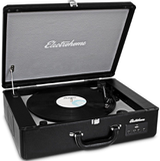 The Archer is a basic portable turntable for the budget-conscious, and that’s no bad thing to say. It’s comparable in design and quality to many of Crosley’s lower end models, if perhaps a bit more stylish (the sleek spy theme continues here). And it is extremely portable. You can put this thing down anywhere.

The drawback here, like it is with many of the Crosleys, is sound. You’re simply not going to get a full range vinyl experience with this type of model. Suitcase models aren’t built for sound, though. They’re built to be carried. Higher end turntables often take up a corner of your life. The Archer is a lifestyle turntable. It goes wherever you go.

Is Electrohome worth stepping outside of the Crosley bubble? There really isn’t that much difference. Sometimes, when you’re dealing with artefacts, it’s all about aesthetics.

The Retro by Pyle is on this list for a reason. It doesn’t really look like much. Its design has little flare. There’s really nothing retro about it. The basic features of the turntable leave much to be desired. It does have USB capability and a rechargeable battery. It’s also pretty cheap compared to the other models on the list. But there’s little else significant about it.

Pyle is an audio manufacturing company. They specialize in speakers. And so the Retro stands in defiance of the common refrain about suitcase turntables -– that they all have subpar sound. Here is a suitcase built for nothing but sound. With a ceramic stereo cartridge and anti-magnetic speakers, the Retro aims for what matters most in record playing.

This player won’t score you cool points when you unclasp it at the party, but your friends may just thank you when they can actually hear the music over the din. And that in itself is a rare thing for an affordable suitcase player. And that may make the Retro something worth your time.

This thing just looks cool. There’s not really much more to say than that. Except that Victrola, one of the oldest brand names in recorded music, is back and updated for a new era, and that you can carry a piece of it with you via Innovative Technology’s Antique Suitcase, though you’ll probably have to dig it out of the attic first.

The Victor Talking Machine Company was one of the first manufacturers of gramophones, those precursors to the modern turntable that heralded the beginning of the vinyl era. The earliest gramophones had all their inner parts exposed, including those famous flower-like horns from which the sound would be emitted. Eventually the company decided that they wanted their gramophones to resemble furniture more than machinery, so as to be aesthetically pleasing. Thus, the Victrola, and the standard enclosed turntable, were born.

The Victrola Antique is an homage to that early era. Looking like a trunk that Dr. Livingston may have taken on a jungle safari, the Antique is all wood and leatherette and brass. Where other vintage suitcase models go for style, this one goes for broke.

Did we mention it also has Bluetooth capability? Not exactly what you’d expect to find in a trunk from 1901.

Perhaps your lifestyle isn’t quite turn of the century. In that case, you have an assortment of suitcases to choose from. Some have more style, some go for better sound. Like any piece of luggage, it depends on where it’s going, what you need it for, and how long you need it to last. There really isn’t that much of a difference between any of the suitcase turntables available today. You’ll always be sacrificing sound for style.

What portable record players bring is freedom — freedom of how to listen and where to listen.

Listen to records in your home.

Plug in your mp3 player on the go.

Transfer vinyl tracks to your computer and play them wherever you like.

Vinyl listeners have never had so many options. The people who carried Victrolas with them in 1920 and tuned into their Crosley radios in 1940 never could have dreamed that one day their spinning machines would be able to do so much more than play records. Likely they wouldn’t believe that records would even exist so long into the future.

But everything comes around again, and every record has another side to it.