You are here: Home / Turntable Reviews / 10 Record Players That Kids Will Love 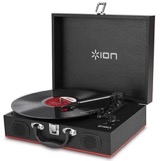 Hopefully, by the end of this article, you’ll have a much better idea of what kind of record player is most ideal for the child in your life.

With that said, below, please take a moment to view our interactive table where you can compare and contrast some of the best kid-friendly and beginner turntables currently on the market today.

Record players that kids can use

Kids love music just as much as you do—maybe even more. Getting them familiarized with turntables at an early age is the best way to teach your child how to respect the audio equipment and develop the same love for hi-end sound.

Naturally, it’s not the best idea to let a child operate your high end turntable without you present, so you should get them their own turntable.

In this article, we’ve selected 10 great turntable models that we think fit the bill by being a great learning tool for anyone, including your kids. Overall, we wanted to select turntables that are cheap, easy to use, and as automated as possible.

There’s a good reason why automated is important, which you can learn more about in this article.

Here’s the short overview of the record players we will be discussing in-depth today:

Newer Players on the Market:

Older/Used Players on the Market:

Now, let’s go over each model and see what it has to offer when it comes to starter turntables.

ION Audio produces relatively inexpensive record players of decent quality. It’s going to be a while before your kid starts recognizing different levels of sound quality, especially when we are talking about turntables.

Let’s be realistic here, even this ION is going to be more than enough in this aspect. What makes this model suitable for kids is the fact that it comes with everything integrated. This means that you won’t have to hook up a set of external speakers to it, for example. It’s simple to use and well within the scope of what a small kid is capable of.

The price is decent as well, although we tried to keep things on the cheap side.

CR8005A Cruiser is here for the same reason as that ION Audio – it’s a simple, well-integrated turntable that won’t be difficult for a kid to use. The performance is definitely there, so we know your kid is going to be happy with that.

Just about the only thing you need to worry about is plugging this thing into a power socket. However, that is something you will definitely have to teach your child well before you let them anywhere near any type of electronics.

The price point is so-so, but still within the limit of what is worth spending on a turntable for kids. 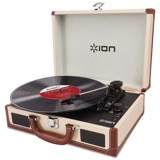 Motion Deluxe shares a lot of similarities with the Transport model we mentioned earlier. It’s the same type of design, meaning a case portable solution, and it comes with a lot of the same features.

Just like the Transport, you can operate this model on batteries. That can give you a peace of mind when you’re not home and you know your kid is going to be messing with their turntable. Aside from that, the price is decent just like the performance. 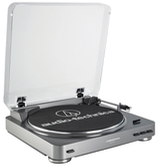 This Audio-Technica is a bit more demanding in terms of additional accessories, but it just might be the perfect middle ground. It’s an automatic turntable, but its design is much closer to the high end models your kid will deal with when they grow older.

It’s inexpensive enough where you don’t really have to worry about it breaking, and the replacement parts aren’t that costly either. The only issue with this design is the fact that you will need speakers and few other things, which adds a bit of complexity to the learning curve.

Now, we’re entering the used portion of our list.

This Aiwa was found on eBay at a price of some $50, which is more than decent considering the type of performance you are getting. It might not be the on the level you would be happy with, but it’s more than enough for a child. This is a pretty compact automatic turntable that is reliable enough and easy to use. Going for a used model like this one is probably the best solution, but that is completely up to you.

This Hitachi represents another inexpensive, turntable that packs enough juice to keep your kid satisfied for years, all while educating them about turntables in the most efficient way possible.

The one we found was about $80, but it was in pristine condition. You could probably get by with a slightly banged up specimen that still works. After all, aesthetics are in a distant third place behind reliability and ease of use.

This PS FL1 was once seen on eBay for mere $60, which is a pretty decent price. It’s not an open top design, but that doesn’t really matter all that much. What does matter is that it’s a relatively reliable model that also happens to be automatic. This Sony is something your kids could end up using for a number of years before they need something a bit more capable.

Looking at this Dual, you’re probably wondering if we’re pushing the limit of what is reasonable, but this can be found for quite a decent bargain if you shop prudently.  That definitely doesn’t mean you will find a similar deal, but they obviously do appear from time to time.

Going for a bit more serious rig doesn’t necessarily have to be a bad thing. It just requires you to explain more things to your kid, which might prolong the learning process for a bit.

JL-F50 is a nice vintage turntable that still offers a decent kick. We found one listed for $50, which is a really nice price range for used models. Again, it will take a bit more time to teach your kid how to work these older units, but that is only going to build their character later on, and allow them to know turntables much better.

The only thing you want to pay attention to is what this model comes with. You don’t want to be in a position where it is missing an important part which you can only dream about sourcing today.

The last one we want to show you is a bit on the expensive side, but still very much within the limits of what we find acceptable. TECHNICS SL-BD22D FG brings that quality performance this German brand is known for, while also being relatively easy to use and setup. If you look for longer, you might find one that is even cheaper than ours.

In order to minimize any kind of risk of injury, make sure that you position your kid’s turntable somewhere where it can’t fall on top of them. On a similar note, keep the cables and adapters away from your kids before you are confident enough they will be responsible for them.

On a similar note, start your kid with an older record that you’re okay with being damaged. Let them learn on that before you give them one of your more “important” records to play.

And above all else, make sure you have patience with your child when they are starting out in this new hobby.

If your kids are showing interest in learning about music and turntables in general, the worst thing you can do is deny them this and threaten them to stay away from your audio gear.

Teaching them how to properly operate the setup will rarely have any negative effects on you or your gear. The models we’ve listed here are good record players that are worthy of your consideration.