So you just got a new record player, or perhaps pulled out a vintage turntable, and you’re all excited to play a beautiful colored vinyl record.  But after you power up the turntable, you realize there’s a major problem—your record player won’t spin.

Well, this is actually a more common problem than you think.  And there are various potential solutions.  So in this article, I’m going to help you troubleshoot this problem so that we can hopefully get your spinning and enjoying your record collection!

Why Your Record Player Won’t Spin

We’re going to cover all the possible reasons your turntable could be acting highly problematic.  We’ll also cover a few easy ways you can resolve each problem.

Problem with a Turntable Belt

Models like the Audio Technica-LP60X operate via a belt drive located underneath the turntables platter.  This belt is is looped around a pulley, connecting to a drive motor that allows the turntable to spin.

Other belt-driven models, like the Marantz TT-15S1, contain the same system—but the belt is external.  You can see it looping around the edge of the platter.

Turntable belts are made of rubber and are prone to accumulating dirt.  They also can, well, just plain wear out.  And when that happens, you’re going to have to replace that belt or else—you guessed it—your record player won’t spin.

So first, check under the platter and ensure the belt is secured via the pulley to the motor drive and that it’s clear of nasty buildup.  And, if the belt on your turntable wraps around the circumference of the platter itself, well, it’s even easier to check on its condition.

Problem with the Record Weight

I suppose it’s possible that, if you purchased a massively heavy vinyl record weight or clamp, and you plucked that sucker onto a record player that isn’t the heaviest or doesn’t have a lot of mass, then this huge record weight could be so mighty that it actually prevents the motor from exercising enough torque to rotate the platter.

Do I think that’s the issue you’re facing?  Well—no, not necessarily.  It’s certainly a moot point if you don’t use weights or clamps.  But if you do utilize a record weight, especially a record weight made by a company that’s different from the manufacturer of your turntable, this issue is at least worth looking into.

Some record players have this irritating complex where, after it’s been used for a while, the power button might need to be held down for roughly 10-15 seconds until the platter spins.

The start/stop button may be completely kaput- which is hard to take note of and may take an extra look from an expert. The power source can be tricky too.

Outlets can be faulty, loose, have weak wattage or require the power chord to be inserted obnoxiously angulated. Try plugging in other working pieces of equipment or your turntable into a different outlet if you suspect it’s out of order.

Problem with the Tonearm

A tonearm improperly placed on a turntable—depending on the record player—might be the reason why the record platter won’t spin. So, definitely make sure the tonearm is properly secured in its armrest before turning on your record player.

Exceptional turntable upkeep should include resetting the tonearm back into its armrest each time a record has ended. The turntable platter might not spin if you leave the tonearm dangling in no man’s land.

Some turntables have an automatic function that returns a tonearm to the armrest after a record has ended. If your record player doesn’t have this feature, it’s crucial to hang around your turntable when the album is about to end so the stylus doesn’t dig into the center label.

Problem with the Record Stand or Flooring

Okay, follow me here.  We all know (or should know) that vibrations can wreak havoc on a turntable.  Depending on the quality of turntable you purchased, and certainly what you sit your turntable on, we know that bumping into the turntable or even walking or running next to the record player can cause it to start skipping.

It could then be possible that, if your record player is on a table that’s not fully flat, that this could cause a weight shift that becomes so prominent, it prevents the platter from being able to consistently spin properly.

Problem with a Direct Drive Turntable

A common mishap with a turntable like the Audio Technica LP-120XUSB, for instance, comes about when we press the power button and don’t select a speed for the platter to spin—either at 33, 45, or 78 RPM.

The internal mechanisms may also be backed up with dirt and will need a good cleaning, if so. Remember that regular cleaning makes our turntables less problematic; if your turntable ceases to spin after you’ve tackled the basics, it might be time to take it to your local specialist.

It’s possible that, depending on where you live and the conditions within your home, that a turntable just sort of died due to unexpected environmental-related issues.

Storage units are notorious for the heat they generate internally, causing irregularities like warping and withering for a turntable’s belt when stored for long periods.

And in general, you never want to have your turntable to come into contact with any water or beverage, and it’s even possible that (depending on the turntable model you have) humidity may have harmed your record player.

Some of the most prestigious turntables stop spinning here and there. It happens—we’re talking about fairly fragile equipment, at the end of the day.

A record player won’t spin for an array of minuscule reasons, many of which are easily diagnosable and contain little to no difficulty fixing. But sometimes, that’s not the case, and you have to begin the cost benefit analysis of tracking down a repair man to fix the issue—or simply buy a completely new turntable to serve as your replacement.

Hopefully, this article has helped you find a good solution to this problem, so you can get your records spinning perfectly like before!

Once you’ve set up your record player according to its manufacturer’s standards, ensure the turntable, preamplifier, amplifier, and speakers are connected to a working power source. Begin by placing your record on the turntable while the platter is stopped. Press the power button and ensure that it lights up to choose the speed at which your record is meant to be played, and then place the stylus on the record via the tonearms cue in the outer grooves of the record.

Most record players are trusty pieces of equipment and have proved so throughout time. If your record player is malfunctioning, it may be an issue as simple as dirt buildup, a flawed belt, power source, or the tonearm may need to be reset. If you’re having trouble locating the problem, take it to an expert before getting rid of your record player.

A turntable belt should last anywhere from 3-5 years. Many record player manufacturers recommend replacing the belt every 1-2 years. A belt may deteriorate more quickly if it is kept in a hot or damp environment. The more that a belt-driven turntable is moved will make it more likely is for the belt to displace itself from the turntable platter, pulley, or decks motor. 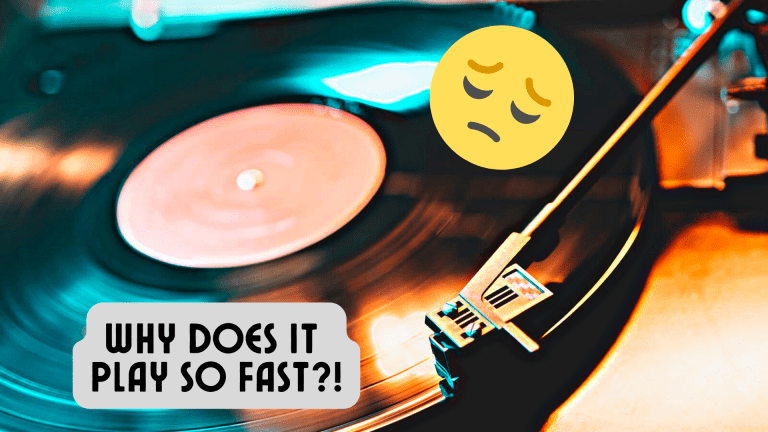 So your record player plays too fast and you’re confused and frustrated because it just won’t work correctly?  If this describes your situation, don’t fret, as I’ll…