In many ways, turntables – one of the hottest items on the audio market – are a strange product.  For one thing, every table does essentially the same thing. It spins a record at a selected speed. A needle (stylus) picks up vibrations from the record grooves, which are fed to an electromagnetic cartridge that turns them into electrical signals. From there, those signals go to an amplifier that powers loudspeakers or headphones. (There have been experiments with using lasers to play records, but we won’t go there.) 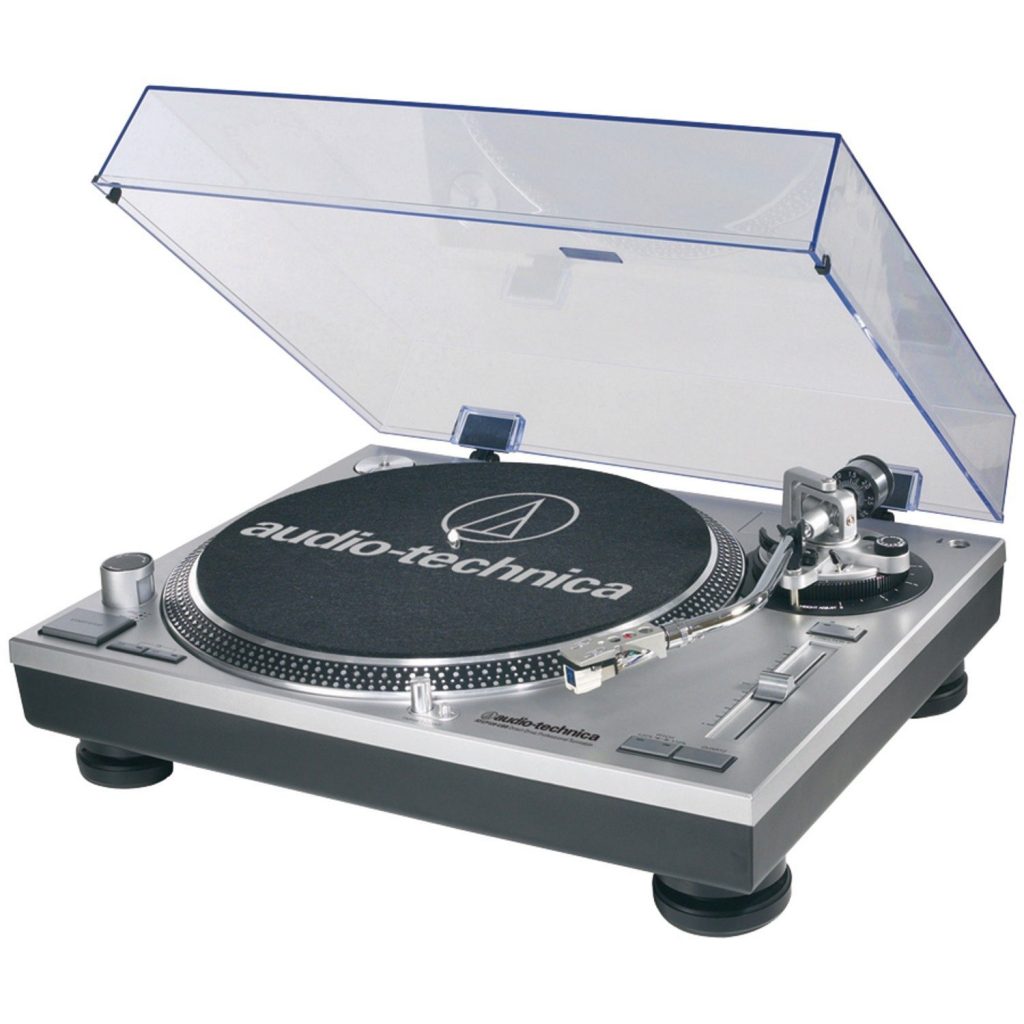 If that technology sounds simple in this day and age, that’s because it is. So perhaps that’s the reason that the “simpler” the table is (as in, completely manual operation), the more expensive it tends to be. Rigs that might appear to be awfully “plain Jane” are generally going to be more costly than units that, for instance, have extra features like allowing for hookup to a computer and the conversion of analog LP tracks to digital music files via a built-in preamp.

But there are exceptions, and one quite notable one is the very popular and highly praised Audio-Technica AT-LP120-USB, a table that defies that trend in a bold way. It sounds as good as its chief competitors, but it doesn’t look or act like them at all.  We’re here to go through the features of this model, rate it vs. comparable, more expensive and cheaper tables (even some other Audio-Technicas), and tell you why, for right around $250, it’s more than worthy of consideration by vinylphiles.

Below, take some time to compare the AT-LP120 to some of the competition that’s currently available on the market:

When it comes to features, the 120 (we like the classic silver, but it also comes in black) is pretty much jam-packed:

The 120 is a sophisticated device, not “plug and play” like so many others. The components of the tonearm must be assembled and adjusted. That includes balancing the arm and setting the appropriate stylus tracking force and anti-skate (the mechanism that prevents the arm from sliding over the record and making one of the most hideous and heartbreaking noises in all of human history). Clear instructions are included, and video help is available.

It may sound complicated, but it’s really not. It is, however, quite exacting. If you do it wrong, you’ll know it immediately. For example, if the arm isn’t balanced or the anti-skate is incorrect, the stylus will not track properly. If the stylus pressure is too low, there will be tracking problems as well.  If it’s too high, you’ll be running the risk of damaging your precious vinyl. In short, if it tracks right and sounds right, it probably is right.

The legendary (and long-gone) Technics 1200 was the granddaddy of the industrial-strength turntable, designed to withstand a night of drinking and debauchery at a party or nightclub. The Audio-Technica players are successfully following on those large footsteps. Since the AT-120 is a direct-drive turntable, it better fits DJ needs. For one thing, it starts and stops faster. For another, it has pitch control. It will even play a record backwards.

None of this means that it won’t be perfectly at home in a living room playing soft chamber music. Some “regular” turntable users simply like the way these machines look.

For about $200 more than the 120, the Rega RP-1 is a more traditional “audiophile” kind of table – certainly in terms of looks. Highly rated by both critics and users alike, it is an utterly refined rig designed with the simplicity in mind that we talked about up front. It is all-manual, belt-driven, doesn’t play 78s and includes no wannabe-DJ features. It doesn’t have its own preamp either. While the AT-120 (and, to an extent, the 60) are aimed at consumers who like flash and features, the RP-1, with its medium-density fiberboard plinth and noticeable lack of controls and adjustments, is elegantly understated. Its hand-assembled, straight tonearm is arguably preferable to the 120’s S-shaped arm. The 120 might have a slight advantage in the cartridge department, and it much easier to set up and get spinning.

U-Turn Audio has lately been turning heads with its line of midlevel turntables, and the U-Turn Orbit Plus certainly has its strong points.  Much like the Rega, it is a minimalist, fully manual, belt-driven table and comes with an outstanding cartridge, the Grado Black 1. And, like the Rolling Stones’ “Rainbow, “ she comes in colors – black, white, red, green and blue. For those who care about such things (and many do!), the tables in the Orbit line are hand-assembled in Massachusetts. One other “feature” – the belt is visible as it turns the platter, something typically seen only on ultra-high-end tables. It’s pretty much ready to play out of the box.

Moving to the top of the line is the best Audio-Technica turntable, the AT-LP1240-USB, the company’s flagship model. At around $400, it genuinely is a “pro” model that Audio-Technica itself states is “primarily for DJ use in nightclubs, touring and mobile applications.”  It is, in short, a rugged, lug-it-around beast, weighing nearly 28 pounds. It’s every bit the table that the 120 is, but even more solid and imposing. It comes in your favorite color–as long as your favorite color is black. Important note about this table: You must purchase and mount your own cartridge.

Appearance and features are what set the AT-LP120 apart from the competition. As mentioned above, a large number of vinyl devotees are taken by the (most often) silvery finish, slide controls, garish platter mat and the overall “in your face” look and feel of this turntable. It doesn’t appear to be a record deck that has to be treated with kid gloves. And a lot of audiophiles in fact relish the amount of setup and adjustment that this turntable requires.

Moreover, transferring vinyl to MP3 is becoming more popular every day, and there are few turntables of this quality that will allow you to do just that. Add the excellent cartridge and the other features, and you have a turntable that should appeal to a very diverse crowd of record lovers.

So much of this, of course, is based on personal preference, not to mention how much you want to spend. Are there “better” turntables out there? Of course there are – and lots of them, with much more sophisticated materials and electronics and more storied and luxurious pedigrees. But you’d be hard-pressed to find that “better” table with this price tag on it.