Hey guys, it’s Michael from Devoted to Vinyl.  And in this video, we’re going to be talking about record players with built in speakers.

So if you’ve ever been in the market for a new turntable, you’re probably aware of suitcase record players, or all-in-one stereo systems.

Both types of these record players have retro designs, they’re very cheaply priced, and they have built-in speakers.

The suitcase record players kick it up a notch by being very portable, and the all-in-one turntable systems allow you to be able to play CDs and cassette tapes, as well as feature AM and FM radio.

Now with that said, the question today is: is a record player with built in speakers worth your money…or is it a waste of time?

Well, in this video, I’m going to examine both sides of the argument.  I’m gonna give you my top three reasons why I like record players with built in speakers.

And then, I’m gonna tell you three reasons why I don’t like record players with built in speakers.

At the end of this video, I’ll give you my overall thoughts on these kinds of record players, and hopefully, it’ll give you a little bit of insight into making your next purchase.

Alright, now with all of that said, how about we accentuate the positive by giving you my first reason why I would recommend buying a record player with built in speakers.

So quality turntables can range anywhere from from a few hundred dollars to a few thousand dollars depending on what you’re looking for.  But if you just want a functional turntable, you can get a suitcase record player or an all-in-one turntable system for a very affordable price. 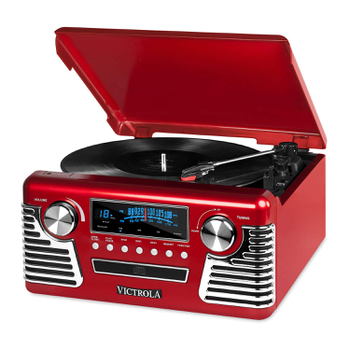 If your somebody that’s concerned that you don’t have enough money to be able to afford a good turntable and a decent pair of speakers, then you can compromise by getting a record player with built in speakers for anywhere from $50 to $100.

Alright, so let’s go with number two, which is you really, really like the retro look of old record players.

Now whether you’re an older person—

Or a younger person—

Nostalgia is at a fever pitch in our society today.

We’re constantly getting remakes of movies every single year, and even TV shows like “24” and “Dallas” and “Twin Peaks” have been revitalized on television in recent years.

So it’s really no surprise that part of the appeal of record players with built in speakers is that they have a retro look that harkens back to the 40s, 50s, and 60s.

So if that retro aesthetic is something that you’re really drawn to, then it would make a lot of sense for you to strongly consider these kinds of record players.

If you’re somebody that likes to take your record players with you on the road or to different locations, then you’re going to really want a portable record player. 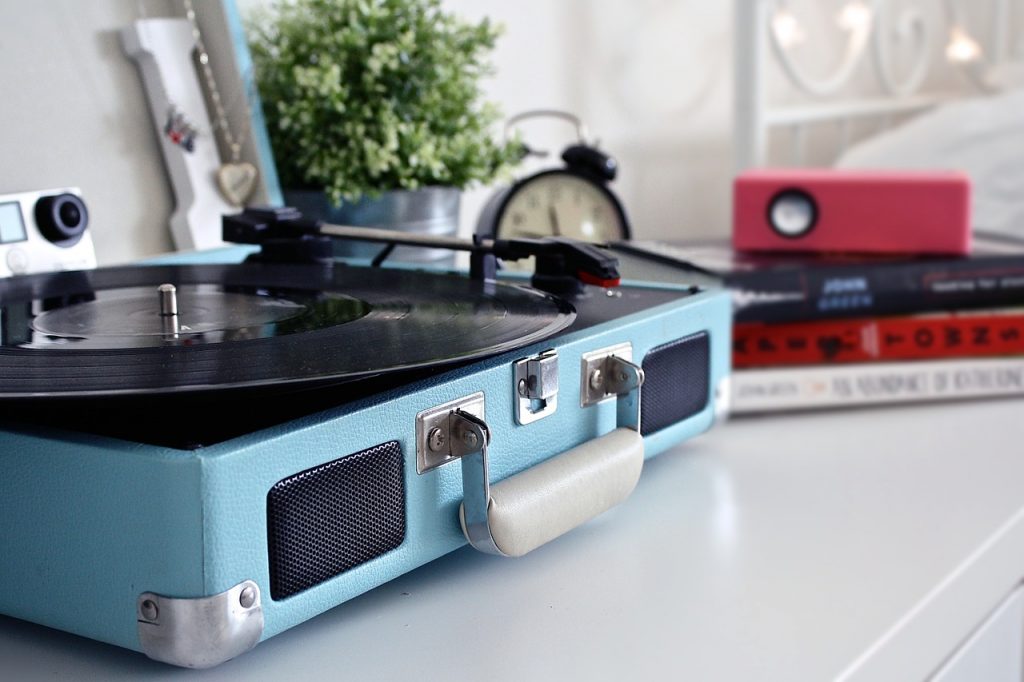 And this is where record players made by Crosley and 1byone really have an appeal for certain people who want to get into vinyl records.  A suitcase record player will allow you to easily transport it wherever you want to go.

So instead of very carefully packaging up your manual turntable and  bookshelf speakers, you can just grab your suitcase record player, close the lid, lock the case, grab the handle, and pick it up and go.

At the end of the day, a record player with built in speakers is going to be offering you convenience above anything else.  And that is definitely the case when it comes to portability.

Alright, so I’ve given you my three reasons for why buying a record player with built in speakers is a good idea.  So now, let me hit you with three reasons why I think it’s a bad idea.

So earlier in this video, I talked about the fact that if you want to buy a record player with built in speakers, one of the benefits of doing so is that you can get it at a very cheap price. 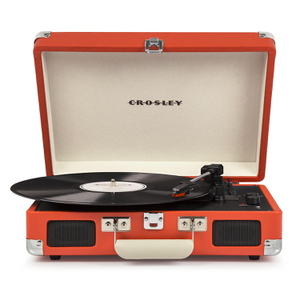 Very often, when we’re talking about things like tonearms and cartridges, they’re going to be made with inferior materials compared to more expensive turntables.

A suitcase record player, for example, will likely have a ceramic cartridge, as opposed to a magnetic cartridge, which is found on pricier turntables.

Now the problem with cheaper turntables, and ceramic cartridges, is the fact that they’re going to use a heavy built-in tracking force.

Unfortunately, when it comes to a lot of these record players with built-in speakers, there’s no way to know what the tracking force is set at.  And to be honest, even if you did know, it wouldn’t matter because you can’t make any adjustments.

Another issue with these record players is that there’s a chance you’re gonna to have to deal with distorted or very weak sound.

Normally, if you were to buy external speakers, you would have to pay a few hundred dollars to get a decent pair.

And so if you think about it, it’s kind of unreasonable to think that you can get a record player that has built-in speakers that are going to be decent and cost less than $100.

Now to fair, some of these all in one turntable stereo systems or these suitcase record players will have external outputs in the back.  So you’d be able to attach your external speakers to them.

But the sound is still going to be sub-par, because you’re dealing with an inferior cartridge.

Alright, so here is number two: Longevity and upgrade issues.

So let me ask you a question: if you buy a record player with built in speakers, and something happens to the speakers, what do you do?

If you buy an all-in-one turntable system, and something happens to the cassette tape deck or the CD player, what do you do?

[Leans back in chair]

The fact is, these aren’t merely hypothetical questions.  Because cheaper turntables, made with cheaper materials, are going to have a higher tendency of breaking down faster. 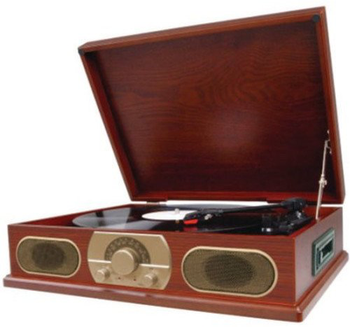 Now, unlike other turntables where, if something doesn’t suit you, you can replace it, an all-in-one turntable setup or a suitcase record player won’t allow you to be able to upgrade easily in case something goes wrong.

A record player with built-in speakers is basically an all-in-one setup—what you see is what you get…and that’s all you get.

For the convenience of being able to have everything built into one system, and for the ability to be able to get it at a great price, you’re essentially agreeing to have limited to no ability to upgrade your turntable investment.

Alright, so number three is something I’ve mentioned a little bit throughout this video, but it’s going to be cheap materials.

Now the best thing that record players with built-in speakers have going for them is their looks and their simplicity.  Unfortunately for the buyer though, you’re going to be dealing with a cheaply made product sold to you at a very cheap price.

The tonearm is going to be made with very lightweight plastic, the speakers are going to have little to no bass, and in my time testing out a Crosley record player, the platter was actually coming apart from the base itself, allowing me to see inside the record player.

I’ve just never seen anything like that before with quality record players that I’ve used.

So getting a record player at a cheap price is always great, but the old saying really is true: you freakin’ get what you pay for. 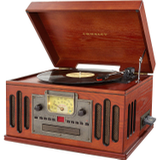 Alright, so now that I’ve given you three reasons for buying a record player with built in speakers, and three reasons why you shouldn’t do it, here are my final thoughts.

A record player with built in speakers should probably be purchased by somebody that does not care about sound quality, wants a very low barrier of entry into the hobby, and maybe…doesn’t have a huge interest in vinyl records.

I think that if you fall into any one of these three categories, you’ll be very happy with a suitcase record player.

However, if you’re anybody else, I think you might be better off saving a little bit more money and purchasing something like the U-Turn Orbit Plus, or the Pro-Ject Debut Carbon or one of the lower end Rega turntables.

At the end of the day, I totally get that record players that have built in speakers have a great retro look that taps into a lot of nostalgia that people love.  But I think you want to always make sure that you’re getting great value for your money in the present, rather than always being tied to the past.

Now if you liked this video, please take a quick moment to hit the “like” button down below.  I’d really appreciate that.

And don’t forget to Subscribe to my channel because I upload a new video every single week pertaining to the vinyl hobby.

And lastly, don’t forget to comment down below because I want to know your thoughts when it comes to record players that have with built in speakers.

Have you ever purchased a suitcase record player?  Do you like the retro look?  Sound off down below.  I’m going to be in the comments section responding to as many of you as I can.  And I can’t wait to bring you guys another video next week.

Thank you for watching.

Get off my lawn!

Get off my lawn!!